In Ottoman illumination art, motifs used to decorate religious, scientific, literary, and scientific manuscripts appear differently. The study subject is flower paintings in naturalist style the decoration of the Selimname, which is one of the Ottoman period works in the collection of the Uppsala University Library. The ornamental areas, period features, meanings of motif, color and composition features of Selimname, which was decorated with naturalistic flowers, were evaluated, and drawings were made from the motifs used in work. Consequently, it’s seen that decorated the 43 foil of the work written by Hoca Sadeddin in Ottoman Turkish. In the halkâr ornaments of the work, rose, hyacinth, tulip, cyclamen, carnation, and cloud motifs were used a naturalistic style. Naturalistic motifs were used to decorate the manuscript's binding, halkâr, and ferağ record. Since there was no record of the period when the work was written, it’s predicted that it was written in the 16th century, considering the years (1536-1599) when the author, Hodja Sadeddin, lived. The naturalistic motifs used in the Selimname work are an important achievement for the field of Turkish arts, as it gives information about the Ottoman naturalist flower style and the use of this style in manuscripts. 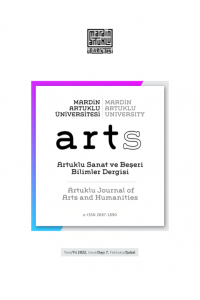